Growing Out of Debt: The Business Impact of the Franco-Italian Quirinal Treaty 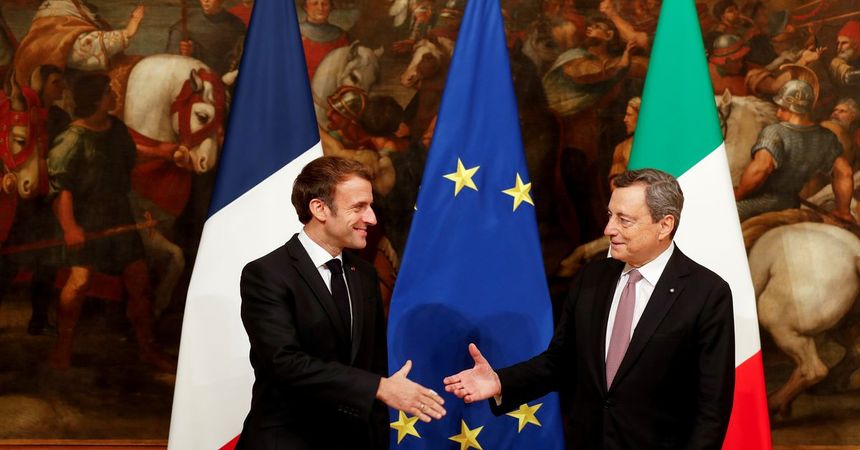 Last weekend, France and Italy signed the Quirinal Treaty, a bilateral agreement designed to bolster political cooperation and commercial ties. The new treaty will open new business opportunities for businesses and could change the EU's internal dynamics. Such bilateral treaties in the EU are rare but consequential. The 1963 Elysée Treaty between France and Germany, which ended decades of deadly enmity, has powered the Franco-German engine, which has been instrumental in building the European Union.

First and foremost, the treaty calls for greater policy coordination and alignment between the two governments across security and defense, European affairs, economic development, sustainability, technology and space, migration, and education and training. The treaty also lays the foundation for further deepening the already strong industrial and commercial ties between the two countries. There are 4,000 Italian businesses in France and French businesses in Italy employ over 300,000 people. [1] The treaty proposes to increase cross-border investment flows, develop new education and training opportunities for Italian and French youth, and calls for new joint industrial projects in defense, new technologies (AI, quantum computing, 5G/6G), digitization, sustainability (transport, infrastructure, and agriculture), and health.

France proposed the treaty in 2017, but the election of a populist-led government in Rome in 2018 derailed the project for two years as bilateral tensions mount. By 2020, tensions abated. Rome and Paris conducted successful consultations on what would become the EU recovery package. The treaty itself was revived only when Mario Draghi, an independent pro-EU technocrat, became Prime Minister in February 2021.

The treaty is largely designed to turn the page on a decade of misaligned policies and counterproductive rivalries. In Libya, French and Italian rivalries reduced their ability to weigh on the outcome and opened the door to Russian and Turkish interventions. In the past few years, disagreements over migration and controversial cross-border M&A projects, have greatly exacerbated tensions and mutual misunderstanding.

What it means for businesses

The treaty is ambitious and has received broad political support in both countries, including from far-right parties like Lega in Italy and Marine le Pen in France. However, both countries will have elections soon and new governments could undo or stall the implementation of the treaty, curbing opportunities.

The main goal of France and Italy is to grow out of public debt so they will push for fiscal rules that allow for growth-enhancing spending and investments and bigger public debt.