Shifting to Green Energy: How will O&G Exporting Countries in the MENA Region Cope 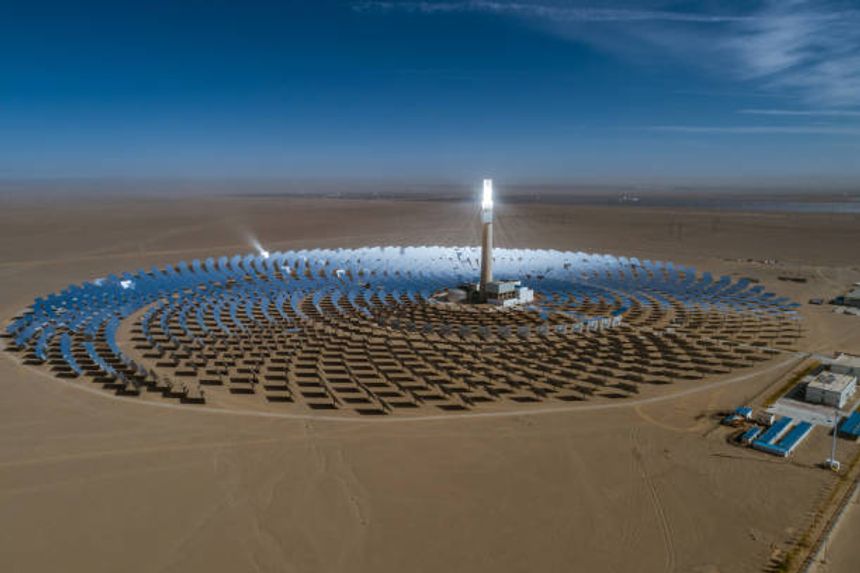 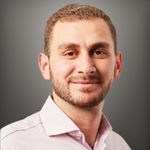 The world is gradually switching to renewable energy. The aim is to limit the effects of carbon emissions caused by fossil fuels which directly contribute to global warming. However, Gulf Cooperation Council (GCC) countries and many Middle Eastern economies depend heavily on oil and gas. How will this global switch to renewables affect the economies of these oil-exporting countries?

GCC economies have been dependent on fossil fuels largely since their inception. Fossil fuel revenues have also been indirectly supporting the region’s non-oil sectors such as refining, chemicals, food, metals, and most notably power generation taking advantage of access to cheap hydrocarbons. However, in line with the Paris Agreement of 2015 to achieve net carbon zero by 2040, it is anticipated that demand for oil and gas will drop causing prices and revenues to plummet. A report by Carbon Tracker, a think tank that looks at the financial impact of cutting back on fossil fuels, estimated that oil-producing countries will suffer a cumulative total revenue loss of $13 trillion by 2040 [1]. The report suggests that over the next two decades (2021 – 2040) countries like Saudi Arabia could face a loss of 20- 40% of their total government revenue (Refer to Figure 1). 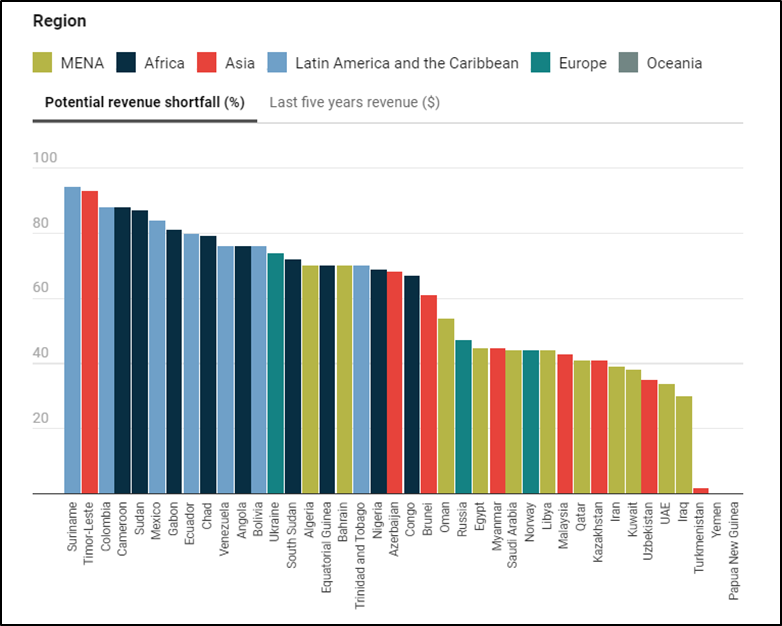 Moreover, the pandemic has already proven that over-reliance on fossil fuels for growth may not be as wise as it may have been. During the pandemic, in April 2020, Brent crude prices dropped from $64 to $23 per barrel which adversely affected the GCC countries to the extent where the IMF had warned unless GCC countries undertake significant fiscal and economic reforms, foreign reserves could be depleted by 2034. 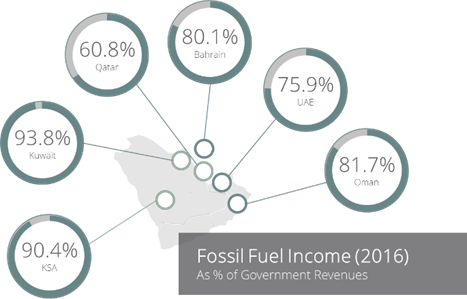 The sustainability of fossil fuel revenues has been an increasingly important concern for GCC countries for years. This gave birth to many visions and reforms promising diversification ahead of demand weakening as countries move towards renewable energy. One of the diversification options has been renewable energy. Many companies, countries, and investment funds have been pouring money into renewable technology and green infrastructure. This is evidenced by an exponential growth in solar and wind technologies and a reduction in the cost of solar PV electricity by 85% and the cost of wind electricity by approx. 50%, since 2010. According to the International Renewable Energy Agency (IRENA), the 2020 global weighted average levelized cost of energy [3] for fossil fuels was USD 0.076/kWh. While for utility-scale solar PV, onshore and offshore wind, it was USD 0.057/kWh, USD 0.039/kWh, and USD 0.084/kWh respectively. Therefore, Renewable sources are now cost-competitive with fossil fuel electricity.

Countries in the MENA region like Jordan, Morocco, the GCC, and Egypt are amongst those countries which started investing in renewable energy. According to IRENA, the latest solar bids in Saudi Arabia, Abu Dhabi, and Dubai saw low record prices of 0.0178 USD/KWh, 0.0242 USD/KWh and 0.0299 USD/KWh respectively. The reason behind these record low prices is the fact that the region is endowed with renewable energy potential and an abundance of land. Solar electricity generation, for example, is possible in areas where direct normal irradiance is above 5 KWh/m2/day which is the case in more than 85% of the MENA region (refer to Figure 2) [4]. According to a study conducted in 2008 by the Centre for Global Development, solar power in the MENA has the potential of meeting 50-70% of global electricity demand. Therefore, what was once a geographic disadvantage, the scorching sun of the region could potentially provide an economic advantage for its nations. Furthermore, according to a suitability analysis done by IRENA, there are significant opportunities for wind deployment in Kuwait, Oman, and Saudi Arabia were covering just 1% of the suitable area could translate into the equivalent of 26 GW of capacity (refer to Figure 3). Therefore, countries in the MENA region can plausibly become exporters of solar and wind energy. 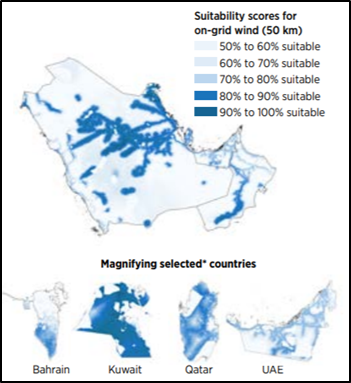 Furthermore, renewable energy projects will boost employment for cities and towns where these projects are initiated. According to IRENA, renewable energy technologies are currently more labor-intensive than fossil fuel technologies with solar PV accounting for the highest number of job-years per GWh over the life span of the facility. This translates into more job opportunities for locals and mitigates the high youth unemployment faced by countries like Egypt, Jordan, and Morocco.

Furthermore, given the fact that most countries in the region suffer from water scarcity, a study by the Natural Energy Organisation (NEO) suggests that renewable energy may help reduce water consumption from conventional power generation by over 95%. According to the study, solar PV consumes between 2 - 15% of the water that coal and nuclear power plants use to produce just 1 MWh. Considering the low solar energy generation cost, countries like the UAE are embarking on projects where solar PV is used to power reverse osmosis desalination plants. For example, the Dubai Electricity and Water Authority (DEWA), hopes to produce 305 MIGD of potable water by 2030 using these solar PV-powered plants. Abu Dhabi has already signed a deal in 2019 to build the world’s largest reverse osmosis desalination plant powered by solar energy.

Whilst countries in the MENA region could potentially meet their own energy demands in the near future, becoming a world exporter could prove to be a bigger challenge. Exporting renewable energy requires physical electrical connections between grids in different countries and across continents. According to the World Bank, there is currently only one electrical transmission interconnection between North Africa and Europe “the Morocco-Spain Connection”. Moreover, Spain’s interconnection with wider Europe is limited. Therefore, investments in transmission infrastructure and transfer capabilities are needed to enable export of renewable energy. 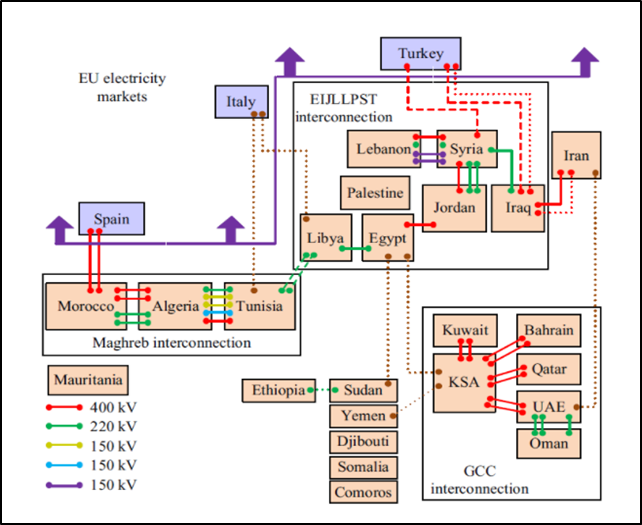 Figure 5 - Schematic Electricity Grid [8] - Solid lines are existing connections while the dashed ones are not yet operational, and the dotted ones are either under consideration or construction

As it can be seen in Figure 5 above, there are already three different interconnected regions in the Middle East. The first is the Maghrib Interconnection which includes Morocco, Algeria, and Tunisia. The EIJLLPST involves Lebanon, Syria, Palestine, Jordan, Iraq, Libya, and Egypt. Finally, there is also the GCC interconnection which includes the UAE, Saudi Arabia, Oman, Qatar, Kuwait, and Bahrain. However, the Saudi Electricity Company and the Egyptian Electricity Transmission Company have already embarked on a project to develop the first large-scale High Voltage Direct Current (HVDC) power line to interconnect the Middle East and North Africa. The power line which will be built by Hitachi is intended to enable up to 3,000 MW of energy to be transported between Egypt and Saudi Arabia. This would potentially connect the GCC interconnection with the EIJLLPST interconnection. Furthermore, plans are underway to connect the EIJLLPST network with Italy through Tunisia and Libya. Recognizing the importance of energy market integration in achieving renewable energy targets, the European Union (EU) has also made reinforcement of electricity transmission interconnection a priority.

In addition to a conventional way of exporting energy through power lines, recent innovations in Hydrogen generation, storage, transport, and use has the potential to revolutionize the whole process. Hydrogen is used as an energy carrier where solar, wind or hydro energy can be converted into liquid hydrogen, stored, and transported easily. The process was first envisioned by a British Scientist “JB Haldane” who described Hydrogen as the most efficient known method for storing energy. Green Hydrogen is produced by purifying water then splitting water molecules into hydrogen and oxygen through electrolysis (i.e. applying an electric current generated through renewable energy). Thereafter, Green Hydrogen is compressed into a liquid and converted into a transportable form by combining it with ammonia and nitrogen. The main issue facing this transportation method is the separation process of Green Hydrogen from ammonia at the destination so Hydrogen can be used for power. However, Commonwealth Scientific and Industrial Research, an Australian government agency, has made significant advances in this field. Existing LNG export terminals could be transformed to handle future ammonia exports. Moreover, the costs of both renewable generation and electrolysis (the process used for Green Hydrogen generation) are falling and demand for Hydrogen is building up. South Korea has announced a target of approx. 600,000 hydrogen cars on the road by 2030. While Japan has a strategic comprehensive energy plan in place for hydrogen cars, garbage trucks, forklifts, and refueling networks. In 2017, Australia and Japan signed a deal to ship liquid Hydrogen in bulk in the world’s first.

Countries in the MENA region have also been investigating the production of clean hydrogen. The GCC region, in particular, is strategically located between Asia and Europe and has the advantage to meet potential demands from both continents. It already benefits from existing infrastructure, used predominately for exporting Oil and Gas, which can be transformed to handle hydrogen exports. While there are currently no published national strategies for hydrogen projects, various initiatives have been developed around hydrogen objectives. One country which took several steps in that direction was the UAE. In 2021, several Memorandum of Understandings (MoU) were signed including:

KSA and Oman are not far behind either. KSA’s ACWA Power, Air Products, and NEOM are developing a $5 billion Green Hydrogen-based ammonia plant in the NEOM development. The plant will include the integration of over 4GW renewable power from solar and wind; producing 650 tons per day of Hydrogen and 1.2 million tons per year of green ammonia. The plant is meant to be completed by Q1 2025. Oman, on the other hand, has embarked on a joint Omani-Belgian initiative called “Hyport Duqum” to develop a Green Hydrogen and Green Ammonia facility powered by solar and wind; offering a peak power of 1.3 GW of renewable power generation capacity in phase 1. The land agreement has already been signed with India’s Acme Group, which plans to commission phase 1 by the end of 2022.

The future outlook is promising as technologies in renewable energy generation, storage and transportation quickly advance and demand start to build up. Renewable energy is quickly proving itself as a viable alternative to fossil fuels which can also deliver great economic and environmental benefits. Costs on the other hand have fallen significantly due to positive feedback loops; i.e. the more renewable energy technologies deployed, the cheaper they become due to economies of scale and competitive supply chains. While an immediate transition from fossil fuels to renewable energy is unrealistic anywhere, investments in enabling infrastructure should ramp up. The aim is to reach a point where countries can reap the economic benefit of renewable energy generation and thus drive them away from fossil fuel exploration. For countries that cannot meet their current needs, renewables potentially offer access to cheap energy. Clearly lowering carbon emission is no longer an aspiration for the world but a necessity for the sake of the planet’s future. Therefore, recent trends and developments in renewables appear to offer a pathway that is environment-friendly and economically and financially viable as well.