The Geopolitical Implications of the Russia-China Statement on Ukraine 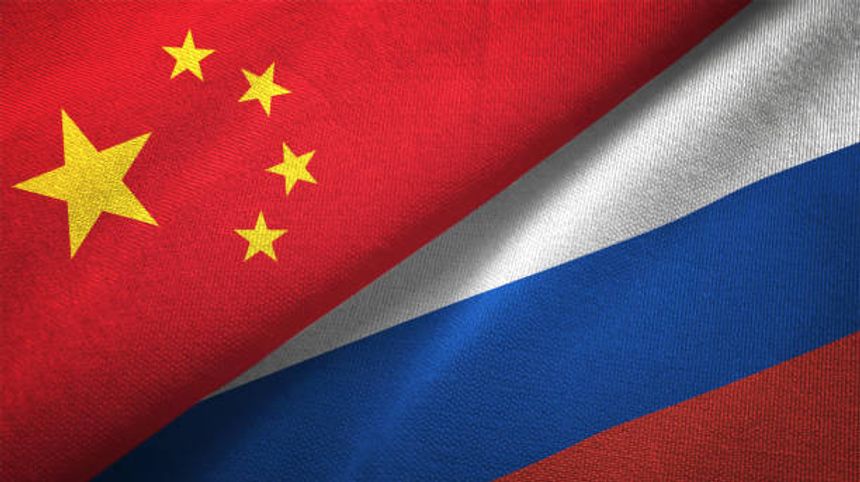 China watchers everywhere are trying to make sense of the increasingly cooperative relationship between Beijing and Moscow, especially considering today’s shifting geopolitical landscape and the return to great power competition. As the Russian military perches on the Ukrainian border, conducting military exercises and steadily increasing wartime logistics and equipment, analysts are looking to Beijing, Moscow’s most formidable ally, to glean insights into the Russian calculus over Ukraine. Understanding the framework and the limits of the relationship will help readers determine for themselves and plan for what lies ahead in terms of trade and sanctions if Moscow continues to escalate the formerly frozen conflict in Ukraine.

“[N]o limits[.]” “[N]o ‘forbidden’ areas of cooperation[.]” Joint Statement of the Russian Federation and the People’s Republic of China (February 4, 2022)

These phrases – released in the February 4 joint statement on shared foreign policy views – ostensibly describe an increasingly symbiotic Russia-China relationship in which Beijing might diplomatically or financially support a Russian attack on Ukraine. Upon closer scrutiny, however, it appears that this is likely yet another demonstration of Beijing’s pragmatism, and in reality, underscores the idea that its support is not truly unlimited.

A deeper analysis of the joint statement suggests that while Beijing may be willing to provide Moscow with limited economic relief in the face of Western sanctions, if Putin’s actions in Ukraine negatively affect Chinese interests, Chinese support – specifically potential sanctions evasion – will almost certainly wane.

If China does in fact help Russia circumvent US, EU, or UK sanctions – including possibly kicking Russian firms out of the Society for Worldwide Interbank Financial Telecommunication (SWIFT) – foreign companies operating in China could face reprisals.

Implications of the “New Era”

The “New Era” statement is unsurprising since it represents the Kremlin’s and Zhongnanhai’s decades-long policy of working toward a multipolar world order. Cooperation has intensified since the US began framing global affairs as a competition between democracy and authoritarianism. China and Russia want to protect their governance systems and they are increasing joint responses to perceived attacks on their regimes. There is a sense that Washington will only accept a compliant and subdued Russia and China that are liberal democracies in the Western – ideally American – mold.

They also crave Western recognition of and respect for their national security interests. To highlight the extent of that desire, Beijing endorsed Moscow’s position on NATO expansion and the European security architecture. Both Moscow and Beijing have long feared foreign encroachment on their borders and both have sought protective buffers. In fact, NATO’s recent intentions to partially orient itself toward China have incentivized Beijing to undertake actions to either prevent its expansion to the Indo-Pacific or form an Asian equivalent.

To preserve its interests, China will not endorse a Russian attack on Ukraine despite common goals. Beijing’s longstanding foreign policy doctrine – codified in its constitution – disavows non-defensive military action. In the statement, Russia and China indirectly frame the Ukraine crisis as a threat to Russian security. This will give Beijing the rhetorical justification for any non-military assistance to Moscow, but it also likely demonstrates a degree of friction between the two. In the joint statement, Beijing cannily crafted the mention of Taiwan while quietly leaving out any reference to Ukraine. China can't support a war of conquest based on reneging previous territorial recognition.

In the joint statement, China and Russia agreed to oppose “unilateral sanctions, and extraterritorial application of jurisdiction” and “oppose interference by external forces in their internal affairs.” If Russia invades Ukraine and is sanctioned outside the UN system, China will provide diplomatic support condemning the sanctions. This is an easy and relatively cheap way of living up to the “new era” of the Sino-Russian relationship. Beijing did not support Moscow’s actions in 2014 and still does not recognize Crimea’s annexation, and Moscow undoubtedly expects China to behave differently this time around.

At the UN Security Council, Beijing will likely veto or abstain from US, UK, or French attempts to impose international sanctions. While Russia will be able to kill these sanctions on its own, China’s action will demonstrate that it values its relationship with Russia. However, a Chinese abstention may also signal to the West it wants a Ukraine crisis to be resolved peacefully through diplomacy. This could elicit some goodwill from the West and possibly temper potential secondary sanctions or trade controls on China should they choose to help Russia.

Depending on how Moscow and Beijing define “oppose” and “intend to counter”/ “fight against,”[1] China may help Russia evade Western sanctions. If they do, this would be a high-water mark for Sino-Russian relations and would indicate a new level of cooperation.

While EU and UK sanctions would likely be more limited in scope, currently proposed US sanctions would intensify.  Russian President Vladimir Putin himself would be targeted, as would at least three major banks forming Russia’s financial sector. The Biden administration would also create lists of additional individuals and financial institutions to sanction. US President Joseph Biden would also sanction Russian sovereign debt transactions, Nord Stream 2, energy and mineral extractive companies, and any other firm or sector Biden determines to merit sanctions. Moreover, the US could choose to sanction organizations providing Russian financial institutions with messaging services – which could lead to Russian firms being kicked out of SWIFT.  As the US Congress battles over the details of its sanctions, global markets are already preparing for disruptions and volatility. US sanctions could potentially include non-financial sanctions including on key technologies the Russian needs for every day operations, including on silicon chips and other critical technologies Moscow depends on.

Due to preexisting bipartisan support for a tough China policy, the US would be tempted to impose secondary sanctions on Chinese entities assisting Russia with sanctions evasion. Economic consequences resulting from secondary sanctions on Chinese entities would likely temper US secondary sanctions urges. Nevertheless, if Chinese firms are on the receiving end of secondary sanctions, Beijing could use its Anti-Foreign Sanctions Law – which China sees as a deterrent – to sanction US companies who comply with US sanctions. China could also levy “unofficial” sanctions – boycotts, compliance checks, and delisting from e-commerce platforms to name a few – on US entities. Without a waiver, US firms would be forced to choose between Washington and Beijing. The US-China economic and trading relationship would become even more unstable and uncertain, especially given that the US Congress is shepherding its anti-China competition legislation through the legislative gauntlet at this very moment. Any perceived support from Beijing could help the bill sail through an otherwise challenging process, and Beijing is watching closely.

To evade Western sanctions more easily, Moscow and Beijing would likely speed up efforts to move away from the dollar. This means more trade could be denominated in rubles or yuan. Russia’s sovereign wealth fund could purchase more yuan and Russia could start issuing bonds in renminbi (RMB). A new currency swap agreement or an extension to a previous agreement could also be signed – larger than the initial $24.5 billion or 150 billion RMB value. Most significantly, Moscow and Beijing could speed up the creation of their joint SWIFT alternative, which has received positive attention from New Delhi.

Should the West impose additional restrictions on exports to Russia – particularly technology – China will benefit from trade diversion. After the EU, China is Russia’s next largest trading partner for most technologies and a leader in some sectors – such as non-advanced semiconductors, broadcasting equipment, and computers. By virtue of the joint statement’s science and technology clauses, China would have a pretext to expand its market share relative to the EU and further link its economy to Russia’s.

But China lacks the capacity – such as advanced semiconductors – and interest to replace everything. It is likely that additional Western technology trade controls on Russia will include military applicable technologies. Because of Russia’s good relationships with India and Vietnam – partially built on arms sales – China will not want to replace Western exports in these areas out of fear they could be used against it. Adequately defending its territorial claims in the Himalayas and the South China Sea are far more important.

In case of an attack, Russia will expect China to offer more support than in 2014 – even if only diplomatic. Beijing will frame Moscow’s actions as defensive to uphold its self-image. China will prefer to keep diplomatic support at the ambassador level but could be willing to authorize State Councilor and Foreign Minister Wang Yi to make a statement.

But expect China to remain mute should Russia only engage in hybrid warfare. Beijing would ultimately prefer to stay out of the dispute and only engage when it must.

However, China will be more than happy to benefit from lost EU market share due to trade controls. It will expand market opportunities for Chinese firms while also bringing the Russian and Chinese economies closer together. Even so, Beijing will not replace potential military technologies out of fear they could be transferred to India or Vietnam.

Beijing is unlikely to risk secondary sanctions to reward Moscow’s behavior. It has bigger fish to fry. China’s leadership has acknowledged that the economy is facing instability pressures. At the very least, economic stability is necessary to maintain social stability. With the 20th Party Congress this fall and a third term on the horizon, Chinese President Xi Jinping is unlikely to risk damaging his ambitions with economic instability resulting from sanctions evasion.

What to Look For

The Russia-China “New Era” statement does indeed indicate the two countries have strong ties. Western sanctions on Russia for an attack on Ukraine will likely be met with diplomatic opposition from Beijing and a willingness to replace Western trade with its own. However, because of the potential economic and political risks, China will likely refrain from helping Russia evade sanctions. Companies operating in or linked to the China market should still plan for the alternative and be aware that they could be on the receiving end of official and unofficial Chinese sanctions as they work to comply with US law.

To learn more about how Russia's and China’s evolution impact your organization’s strategy, contact Ankura’s Geopolitical Advisory practice. We help provide the competitive advantage and confidence you need to succeed in the global marketplace.

[1] The Chinese word used in the statement – fandui – can mean “oppose” or “fight against”.

The sides intend to resist attempts to substitute universally recognized formats and mechanisms that are consistent with international law for rules elaborated in private by certain nations or blocs of nations, and are against addressing international problems indirectly and without consensus, oppose power politics, bullying, unilateral sanctions, and extraterritorial application of jurisdiction, as well as the abuse of export control policies, and support trade facilitation in line with the rules of the World Trade Organization (WTO).