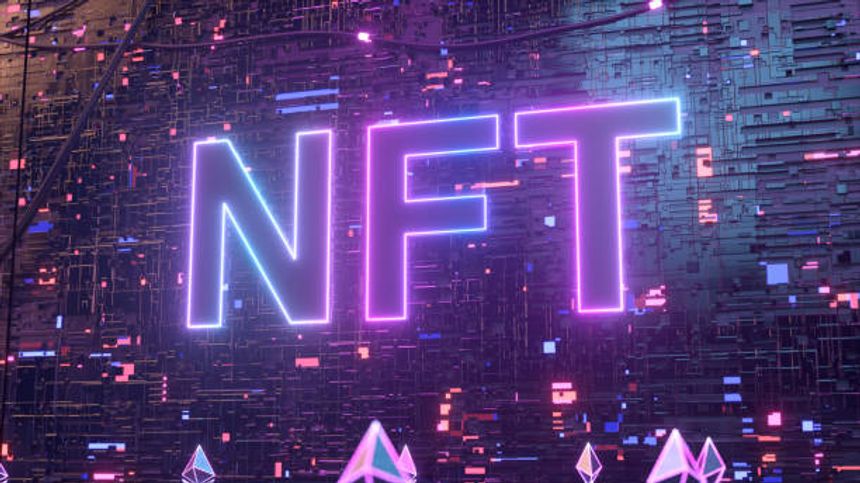 Non-fungible tokens are seen by some as an exciting new way to own digital assets such as art, but seen by others as a global confidence trick akin to The Emperor’s New Clothes.

Public awareness of non-fungible tokens (NFTs) has increased as more digital assets are created and sold, often for huge sums. Interest in them took off so quickly last year that it was dubbed “The NFT craze”. The artist Beeple sold a collection of his digital art as an NFT for $69m at a Christie’s auction last year, with 22m people watching live online. Around the same time, Twitter boss Jack Dorsey sold an NFT of his first tweet for $2.9m.

Ukraine’s Metahistory Museum issued a collection of NFTs in March this year depicting the war against Russia. On the first day, it sold 1,282 digital works of art for more than $600,000, the proceeds of which went into the crypto wallet of the country’s Ministry of Digital Transformation. Not to be outdone, Rishi Sunak, Britain’s Chancellor of the Exchequer, in April asked the Royal Mint to create an NFT by the summer, as “an emblem of the forward-looking approach” of the government to crypto-technologies and crypto asset.

On the downside, NFTs are a high-risk investment. The UK’s Financial Conduct Authority describes all crypto assets as “very high risk, speculative purchases” with little consumer protection, and “if you invest in crypto assets you should be prepared to lose all your money.” It also warns that “the crypto asset marketplace is a target for fraud and scams so you should be extremely cautious before investing.”

NFT sceptics compare them to the fashionable clothing in the parable of The Emperor’s New Clothes, where the emperor is tricked into thinking he is wearing real clothes, but they do not exist and he is in fact naked. Similarly, NFTs are not real. They do not exist, except as images that can only be seen on a smartphone, tablet, or computer.

What is a non-fungible token (NFT)?

“Fungible” means “interchangeable”, “non-fungible” means “non -interchangeable”. An NFT is non-fungible because the token is unique; it is proof of authenticity and ownership of a specific digital asset, although copyright is not usually granted. This makes an NFT different from a bitcoin which is the same as, and fungible with, all other bitcoins.

Most NFTs are on the Ethereum blockchain, which means you buy them with the ether cryptocurrency. Ether can be bought with dollars, pounds or other fiat currencies on crypto exchanges like Coinbase or payment apps like Revolut. Purchasers then set up a crypto wallet, like MetaMask, to buy, receive, store and sell NFTs. The wallet must be linked to an NFT marketplace like OpenSea, SuperRare, Foundation or Decentraland. You also have to pay a transaction fee, called a “gas” fee, to pay for authentication through blockchain.

One of the most popular NFT artwork collections is CryptoPunks. Created in 2017, it is a limited run of 10,000 pixelated images that sell for hundreds of thousands of dollars. The website describes them as “one of the earliest examples of a non-fungible token on Ethereum” and the “inspiration for the ERC-721 standard that powers most digital art and collectibles”.

The original CryptoPunks were issued free to anyone with an Ethereum wallet and no more have been produced. They can only be bought and sold via the secondary marketplace. The statistics on the website show that, at the time of this writing, the current lowest-priced available costs 59.99 ether ($170,806), 8,217 have been sold in the last 12 months, and the total lifetime value of all sales is 620,550 ether ($1.97bn). The most expensive sold was an Alien punk, sold for 8,000 ether ($23.7m) in February 2022. The seller had acquired it four-and-a-half years earlier for the equivalent of only $1,678, so made a massive profit.

Another NFT collection is Bored Ape Yacht Club, a collection of 10,000 NFTs of cartoon-like primates, which the platform describes as “unique digital collectibles living in the Ethereum blockchain”. A Bored Ape NFT is not only “a provably-rare piece of art”, it says on the website, but a Yacht Club membership card and the buyer’s avatar for moving around the club. Access is granted to members-only benefits, “the first of which is access to The Bathroom, a collaborative graffiti board”. The cost of a Bored Ape is 0.08 ether, or £181.42 at the time of writing, so it is in a much lower league than a CryptoPunk.

Another venue for purchasing NFTs is Decentraland, a browser-based virtual reality world on the Ethereum blockchain which opened to the public in 2020. It is a version of the metaverse, as championed by Meta Platform’s Mark Zuckerberg. People enter Decentraland as avatars, walk around, chat to others and buy NFT land, property, art, and items from shops using the MANA cryptocurrency. The cheapest plot of land is around 4,000 MANA, or £5,280, which can be sold at some future date to someone else, hopefully for more than the original price.

However, if you only want to buy a pair of “colorful urban sneakers”, of which there are 91 of 100 left, then they are yours for only 3.49 MANA, £4.60. During the recent Metaverse Fashion Week in Decentraland in March 2022 famous brands like Tommy Hilfiger and DUNDAS sold digital clothing as NFTs.

The attractions of NFTs for creators and buyers

Despite their intangible qualities, plenty of people are attracted to NFTs. Creators of NFTs are primarily interested in selling them to make money. Other motivators include gaining professional satisfaction from creating original digital artwork, as a traditional artist would; publicizing a cause or a business, as the Ukrainian Metahistory Museum is doing and as Twitter's Jack Dorsey did; or forming an online network of like-minded people, where the NFTs also provide access to a club, as the creators of the Bored Ape Yacht Club did.

As for buyers of NFTs, they are also interested in making money. They hope that their digital asset will appreciate in value and can be sold at some point in the future for a profit. Overall, NFT values are gradually rising. The average NFT price in April 2021 was around $600 and in March 2022 it had risen to around $1,300, according to nonfungible.com, the world’s largest NFT data resource.

By contrast, over the same period the price of ether fell from around $3,500 to $3,000. “The price of NFTs is increasingly decorrelated from the price of cryptocurrencies,” write the authors of NonFungible’s NFT Market Quarterly Report, Q1, 2022, published in April. “NFTs are now a sub-asset dependent on the health of bitcoin or ether,” they continue. “They have reached a critical mass from which they can have their own trends, without directly suffering the volatility of the crypto markets.”

Other reasons people buy NFTs include the pleasure of owning and looking at an enticing piece of digital artwork, as well as the social media status that comes with sharing it; making a donation to a worthy cause, such as the Ukrainian digital war artifacts; gaining access to a club, such as Bored Ape; or being granted privileges not available to the general public, such as the ability to buy special merchandise or video clips.

The drawbacks of NFTs for buyers

NFTs have several downsides. First, they are highly speculative and volatile investments, with a serious risk of asset bubbles being created and then bursting. Crypto-sceptics regard NFTs and other digital assets to pyramid selling and Ponzi investment scams, where new investors drive prices up, existing investors sell and get out, and when the number of new investors dries up prices fall and the scheme collapses. That is what happened with “Tulipmania” in Holland in the 1600s, the “South Sea Bubble” in Britain in 1720, and the U.S. housing bubble that caused the global financial crisis of 2007-8.

For an extreme example of how much money can be lost on an NFT, look no further than crypto entrepreneur Sina Estavi, the man who paid $2.9m for the NFT of Jack Dorsey’s first tweet last year. He tried to re-sell it at auction this April, at a starting price of $48m, but the highest bid he received was $6,800.

As already mentioned, NonFungible’s Q1 report showed a healthy rise in average prices of NFTs over the previous year, but the report does add some notes of caution. It says there has been a decline in speculative purchases of NFTs “following the losses recorded by many buyers”. There have been many press reports saying “the NFT bubble has burst”. Weekly profits from global NFT trading has declined from successive peaks of $400m a week in October, January, and February to $100m at the end of March.

The second drawback can be the poor quality of the visual imagery in the metaverse where many of these transactions take place. These virtual worlds are promoted as fantastic experiences, but the reality is often more prosaic and disappointing. After a recent visit to Decentraland, Financial Times Global Tech Correspondent Tim Bradshaw described it as “underwhelming”, more like the children’s games Minecraft or Roblox than “the slick immersive future envisioned by Mark Zuckerberg”. It is “heavy on the pixels and Lego-like digital blocks”, he wrote. “Decentraland’s graphics look like something from a late-1990s Nintendo or PlayStation game.”

Third, NFTs use a lot of fossil-fuel generated electricity to validate and secure transactions which contributes to climate change. Environmental groups are campaigning against Bitcoin for this reason, although the Ethereum blockchain on which NFTs are based is in the early stages of transitioning to a different software code which will use 99.9% less electricity.

Fourth, NFTs are lightly regulated. This exacerbates financial crime risks, such as insider trading, money laundering and tax evasion. It also means there is less protection for consumers from fraudsters and hackers; and if an NFT platform or wallet closes down, do the NFTs in them disappear?

For instance, in the UK, crypto assets are defined as security tokens or electronic money are regulated, but those defined as cryptocurrencies or NFTs are unregulated. However, the 2019 anti-money laundering and terrorist regulations do apply to crypto asset exchanges, custodians and wallets, including those handling NFTs. Those businesses need to register with the Financial Conduct Authority and comply with all regulatory requirements. The anti-money laundering regulations also apply to businesses participating in the art market, and that could include digital art represented by NFTs, in which case they would have to register with HM Revenue and Customs and comply with the regulations.

The verdict – the jury is out

There is no doubt that NFTs are popular, and their use has increased immensely in the past 12 months. People are buying and selling them in the hope of making big profits. There seems to be no sign yet to the end of the NFT craze. Yet critics believe that being a craze is the problem. They fear that the irrational obsession with them is global hype likely to end in tears.

So, are NFTs an exciting innovation with numerous benefits, or just a fad with little inherent worth? Will they steadily evolve and become mainstream, or will they come to a sudden end with an almighty pop as the bubble bursts? The answers are, for the time being, anyone’s guess.